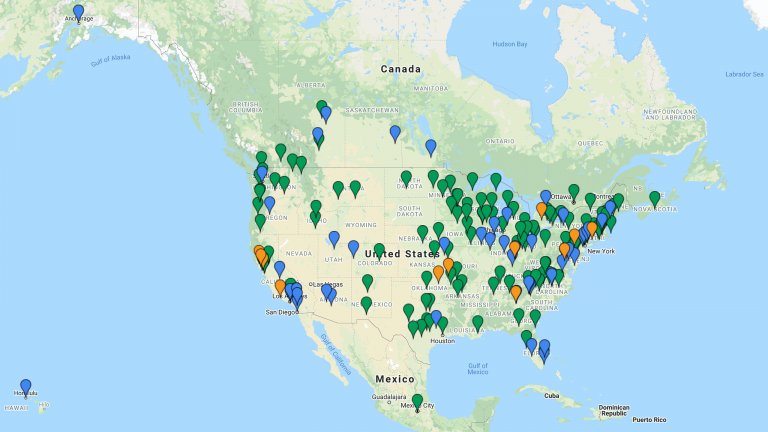 Get On the Map!

Are you part of a city committed to growth that is sustainable, resilient, and has a strong return on your investment? Less car-dependent and more walkable? A safer place for people young and old? A place with good schools for those with children? A place that cultivates good jobs that are accessible? A place with strong Cool Factor that attracts new talent to those jobs? Full of places people love? Then Get On the Map!

This Map. Back in 2015 when Strong Towns first posted this map of North American cities and towns that have gotten rid of parking minimums, it was nearly empty. Now, as you can see, the tide has turned. Why? Because of all the things your city can do to achieve the objectives above, the one that is both easiest and most impactful is to get rid of your minimum parking requirements.

Why? There are several reason laid out on Black Friday focused on the fact that the colossal waste of land caused by minimum parking requirements actually forces everything to be built to the insolvent patterns of sprawl, no matter how well-meaning the city or its developers. Meet the minimum parking requirements, and parking lots consume 3/4 of the land. And so auto-domination inevitably marches on, because when things are so spread out, nobody walks and everyone is forced to drive.

Auto-domination’s damaging ripples invade so many parts of our lives and make the 15-Minute City impossible for all but a few of us. It even pushes the less prosperous of us into Automobile Poverty. Because the standards of sprawl push everything several times further apart than in a sustainable city, everyone wants to cut their commute times, but the costs of speed are high, turning countless acres of American cities into highway buffers and building costly infrastructure that will never pay for itself. And that need for speed creates thoroughfares known as freeways, but which should be called “cheapways” because of how much real estate value they kill for blocks on either side of them. And the impoverishment driven by costly infrastructure means many lost opportunities for spending on other things like better schools. But that’s only the economic side of the story.

Here’s where it gets personal: There’s a high injury and death toll of auto-domination, and even if the crashes don’t kill you, commuting has many other damaging effects to physical and mental health. Many of these health risks combine to drive the obesity epidemic from which we’ve been suffering worse each decade. Walk Appeal is the strongest silver bullet of wellness, but it goes to zero in a landscape of endless parking lots. Zero.

If getting rid of minimum parking requirements is an idea that’s new to you, you’re likely really pushing back at it, something to the tune of “what do you mean, getting rid of parking? That’s impossible here!” But that’s not at all what I’m talking about. Instead, it’s about getting rid of city-mandated parking minimums and letting the market decide how much parking is needed for each place and building. Come thrive with the places who are already doing it. Seriously.

Oh, and for another 135 reasons why walkable urbanism matters, check out CodeScore.